8
February, 2020
Allison Zhao, Blog Correspondent
Allison Zhao is an aspiring author currently studying at the University of Toronto. She haunts bookstores across the city and is forever on the lookout for beautiful moments.

With the end of 2019 came lists and awards from media outlets about the past ten years in review. Among these was the declaration by The New Republic that Rupi Kaur was their writer of the decade.

Kaur, at only twenty-seven years old, is known as an “Instapoet,” and owes much of her success to her highly popular Instagram account where she publishes short poems accompanied by distinct line drawings. Kaur currently has 3.9 million followers, and her posts alternate between coloured photos—often of Kaur herself—and poems made up of black text on a white background. Social media poetry tends to follow a similar structure: aesthetic, brief, and easily digestible. 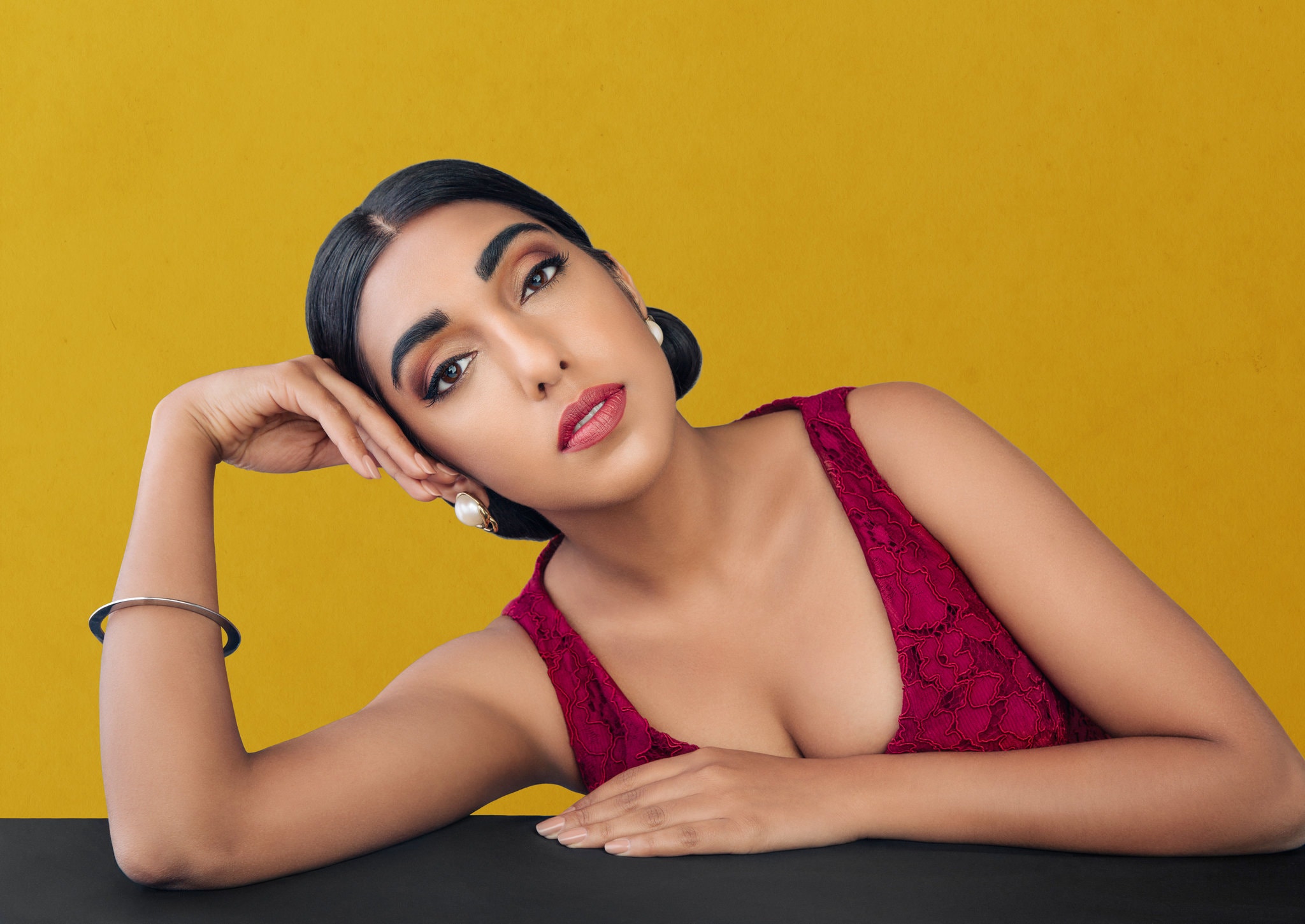 Rupi Kaur, pictured in the New York Times in 2017.

Kaur, at only twenty-seven years old, is known as an “Instapoet,” and owes much of her success to her highly popular Instagram account where she publishes short poems accompanied by distinct line drawings. Kaur currently has 3.9 million followers, and her posts alternate between coloured photos—often of Kaur herself—and poems made up of black text on a white background. Social media poetry tends to follow a similar structure: aesthetic, brief, and easily digestible.

In The New Republic’s article, author Rumaan Alam says bluntly, “Kaur’s writing is not itself to my taste,” citing the “affectation” of using all lower-case letters in her poetry, and gives an example of an “impenetrable” metaphor that Kaur employs – she writes, “did you think i was a city / big enough for a weekend getaway / i am the town surrounding it / the one you’ve never heard of / but always pass through.” Alam in turn notes that the likening of the speaker to a suburb means little to him. Criticism of Kaur’s work tends to follow similar patterns; her writing has been described as shallow, childish, and unfinished. But as Alam explains, perhaps the quality of Kaur’s work and the endless online debate about whether or not it is “good” poetry is not what matters when naming her writer of the decade.

Kaur was born in India and immigrated to Canada at a young age with her family. Despite the title “writer of the decade,” she only began publishing poetry on Tumblr in 2013, and then Instagram in 2014. Her commercial success, however, has been remarkable: the first of her two poetry collections released in book form, titled milk and honey has sold over two and a half million copies and has been translated into twenty-five languages. She and other Instapoets are credited with contributing to a 76% rise in adults reading poetry between 2012 and 2017. Is it then fair to say that Kaur’s work is not valuable to the literary world?

As Alam explains, what makes Kaur worthy of the title of “writer of the decade” is how thoroughly her work represents today’s young generation and the changing way that they view the world. He writes that for a long-time poetry reader, Kaur’s work may “crumble under traditional critical scrutiny.” That is beside the point: she is not writing for seasoned readers of traditional poetry. Her audience is used to scrolling through posts, and social media and cellphones are a dominant factor in their lives. Kaur’s poems are tailored well for this – they are comprehensible, relatable with minimal effort, and easily reposted or shared. Instagram is not simply a way of advertising her work or connecting further with her readers; it is her publisher, separate from her physical books. The way she releases work and reaches her audience can certainly be considered definitive of the 2010s.

On December 26, 2019, she posted a characteristically brief poem on her Instagram account: “if you have never / stood with the oppressed / there is still time.” The poem was accompanied by a significantly longer caption explaining recent events in Kashmir, including violence, mass detentions, and the internet shutdown that the Indian government imposed on the region (since then, limited access to the internet appears to have been restored in Kashmir). The caption also highlights the lack of Western media coverage on the situation, and Kaur declares her support for Kashmiri people against state-sponsored violence in India. The poem itself might attract scorn, but Kaur has taken the tools of today’s youth and used them to successfully and unashamedly communicate her narratives. She, as a young woman of colour, has found herself a platform and cultivated it, writing about subjects that touch hundreds of thousands of lives, including love, self-love, femininity, struggles with abuse, and overcoming trauma. Through the vagueness of her verses, perhaps she has not created empty words, but instead offered accessible content. Defenders of Kaur’s work reference her openness, her honesty about sharing trauma, and her authentic experience.

An example of Kaur’s poetry, featured in Buzzfeed News in 2017.

Beyond discussion of the quality of her writing, Kaur faces criticism about possible plagiarism and the exploitation of a cultural heritage. Nayyirah Waheed, who similarly publishes work via social media, posted comments to her Tumblr accusing Kaur of plagiarizing her work. She wrote, in her typical style of using full stops instead of commas and all lower-case letters, “that trust felt it had been violated. and that boundaries were being crossed. it was also very hurtful and confusing. because this author has expressed on social media. and in professional interviews. that i am one of their main WOC writing inspirations. and i truly thought that they valued and respected my work.” Kaur had indeed previously named Waheed as an inspiration, and there are certainly similarities in style, including the use of all-lower-case text and minimal punctuation save for periods, but Kaur denies all plagiarism allegations.

In 2017 a lengthy essay was published on Buzzfeed News, titled “The Problem with Rupi Kaur’s Poetry.” The essay’s author, Chiara Giovanni, covers Kaur’s plagiarism accusations, but chooses to focus on Kaur’s South Asian heritage and how she includes that heritage in her work. On her website, Kaur writes, “we know sexual violence intimately. we experience alarming rates of rape. from thousands of years of shame and oppression. from the community and from colonizer after colonizer. but we also challenge that narrative every single day. and this poetry is just one route for doing that.” Giovanni, in turn, writes that Kaur dips into the South Asian experience when it fits into her brand, but otherwise keeps her work broad to avoid alienating Western fans – essentially, an attempt to benefit from both championing a specific cultural heritage and universality. Giovanni takes issue with Kaur writing of generational trauma associated with her cultural background and portraying it as her individual narrative, while keeping the true stories behind the poetry ambiguous at best.

Like Rumaan Alam, I do not regularly read Kaur’s poetry, as a matter of taste – for me, the lack of specificity in her verse makes it less interesting or poignant.  With that said, however, I am unsurprised by her being named writer of the decade and I find her deserving of it. Perhaps Rupi Kaur is not the greatest poet of this generation. Perhaps her work is problematic. But as Rumaan Alam explains, she inspires discussion and has undoubtedly made a mark on the literary world. For the impact she has made by writing about continually relevant topics in today’s world, including race, sexuality, feminism, and abuse, and bringing these subjects to a young generation in an accessible way, she has earned the title as writer of the decade.

Kaur has taken the tools of today’s youth and used them to successfully and unashamedly communicate her narratives.

← Unraveling the Queer Memoir Biking in Our Land →