Antonia Alksnis’ “Republic” impressed us in AV 142.2 with it’s smooth, delightful prose speckled with pointed references to Plato’s Republic in both form and content. Carl Christian Abrahamsen, our most recent Editor-in-Chief, had this to say on Alksnis’ piece:

Antonia Alksnis’ piece is a poetic reading of a single sentence: the opening of Plato’s Republic, when Socrates goes down from the Athens to the port of Piraeus to discuss the organization of the just city. Alksnis’ language is driven by this Homeric descent (the Katabasis), moving in tumbles and ecstatic repetitions, marked by deep interiority and sudden dissents from reality. It is also a rich philosophical commentary, as Alksnis draws attention to questions implicit in Socrates’ descent, and which have stalked the history of political thought ever since: questions about the dialectical construction of the state, the exclusion of certain people from this political dialogue, and the possibility, even the immanency, of total societal change

I went down to the Piraeus – and that’s where they stopped me.

You’re not allowed here, they said. The Piraeus is closed.

He gave an Alcibiades smile, leaping torchlight and cold white moon bleeding charm on his closed, locked face. The other one stayed silent, lips sepulchre-tight, and if they hadn’t been the rocks would have come tumbling out on my winter-white feet, bare on the road in the chill of nighttime, tumbling out tearing his lips, tumbling words that might actually have convinced me.

At this point I was getting sick of repetition. I might have sat in a marble atrium and shouted at the gleaming stone and learned as much as I had been learning. So the Piraeus was closed. The marble atrium was empty, columns tall, tiles winter-white and veined – my feet invisible, if there had been no shadow to mark their position.

The rocks tumbled out on the echoing floor and they used them to build the columns. That much I knew. I didn’t know when the columns would come down. That was part of the reason I wanted to go down to the Piraeus.

They were supposed to be made of marble, but they were rocks and stolen pebbles and I might have known it if the Piraeus was open. Instead I stood there, slack-jawed and mute, feet going numb, watching the columns and blushing for shame and horror.

He had rocks in his mouth; he didn’t. They came out anyway. The columns cracked, and the Piraeus was closed.

You’re not allowed here, they said.

I went down to the Piraeus and I lay prostrate on the docks and by the time they found me, the columns were already falling. 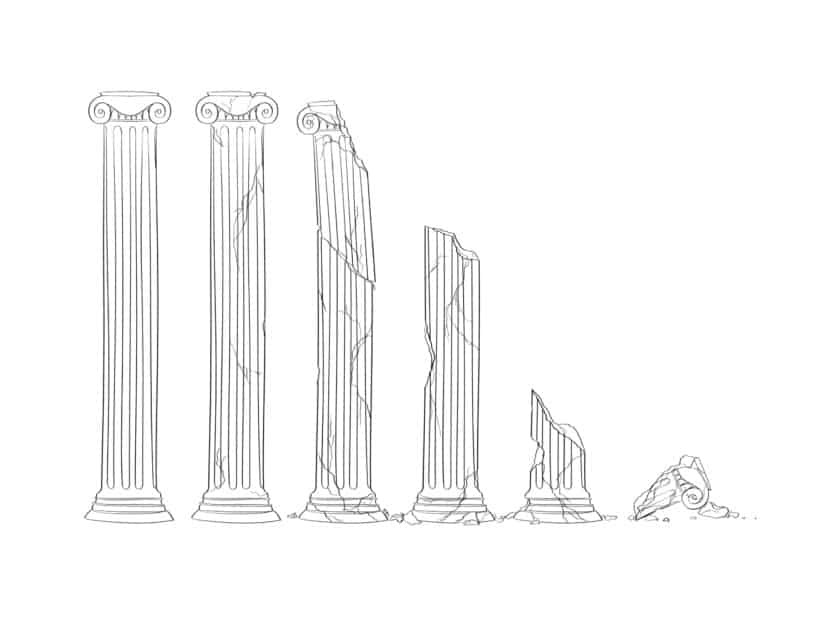 the columns were already falling

is a fourth year student at Victoria College. She is a philosophy major, with minors in political science and classical civilization. She can be found at her patreon, blog, tumblr, and instagram