Two friends are stopped by a man on a bike. He asks for help. The friends don’t stop at first. They are on their way to a show. One of the friends knows the lead singer of the opening band from Instagram. They say the band’s alright. The other friend is visiting from out of town. It is close to eight. No snow. The man hops off the bike that is too large for him and pushes it towards the corner store. He grips the handlebars. The friends follow.

The door is locked. The cashier points at the man and shakes her head. She is wearing a neon vest, the kind construction workers wear. Lina is eager to leave. She wants to hang up her heavy winter coat and order a beer. She steps off the curb. She is only in town for the weekend.

“I want to buy something,” Kite mouths to the cashier.

The cashier presses a button and there is a click. Kite walks in and the man follows. The light makes him squint. Lina watches their backs then steps back onto the curb, then into the store.

The man ducks between the aisles, his faded flannel flapping behind him. He tucks a bag of chips in the crook of his elbow, shuffles his feet, grabs two bottles of blue Gatorade, and brings everything to the counter. Kite steps forward with their wallet out. The man hurries back down the aisle “for his dad”. Lina doesn’t see what he adds to the haul. She sees him whisper something to Kite. Kite shows their ID to the cashier, who slides a pack of Spirits over the counter. The man thanks Kite. He thanks Lina too, for no reason at all.

The two friends continue on their way. They don’t say anything for a while.

The whole scene plays out in minutes but in Lina’s head time stretches. In her head the man chooses a bag of chips, then moves to put the first bag back, then retracts his arm. He puts the food on the counter, then turns back to the aisle. Lina expects him to return again and again to the aisles until he has emptied the entire store. But wait! he’ll add each time, all zigzag brows and commercial teeth—there’s more!

“I don’t have that much money,” Kite says.

“What about your friend?”

The man is wearing flannel over his hoodie. His hands are calloused or covered in dirt, or maybe it’s the light. The room spits at him. Lina doesn’t want to hear the total. Kite pays. He thanks them both. He even nods at the woman behind cash, before taking off on his bike.

They find a table by the wall and drape their coats over the backs of their chairs. There is a plate of bones on the table next to theirs, the meat left in chunks. Lina shakes her head at the TV behind the bar. Kite turns, watches the screen, turns back and takes a dramatic gulp of their beer, mimes slamming the glass down, and says: Politics! The friends laugh, then Lina asks Kite to do the bit again. I want to catch it on camera, she says. Kite gets off their chair and squats so the table seems higher, like they’re sitting at the bar. They drink their beers.

A group near them gets up and walks through the curtains separating the bar from the venue.

“That was the band?”

Lina finishes the rest of her drink and slams the glass down. It shatters. Her eyes widen and Kite leans back in their chair, laughing. Lina apologizes. I was only trying to be funny. I was just doing a bit.

Lina is only there for the weekend so she goes everywhere. She follows Kite to the radio station and spins in an armchair while Kite speaks through a mesh screen and slides buttons up and down a blinking board. They talk during songs. Kite answers calls and takes requests. Lina stores the memory on her phone in an attempt to remember the present. Her storage is full of seven second clips.

Kite has a red bandana tied around their throat. They wish happy birthday to a local folk singer and puts his song on in honour. The transition is so brief the host of the next show is through the door before it can even close. Kite and Lina race down a wide staircase cased in yellow rubber and visit their friend Jase at work.

It’s late and the café is empty.

“Want a coffee? Latte? I’ll make you anything.” Jase points to a shelf of oils. “I’ve never tried banana.”

“Want me to add hazelnut oil?”

“Taxi Taxi” by Cher plays in the background. Jase has been listening to Cher all day. That morning she drives to Kite’s house in a beat up blue Chevy and the three of them, JaseKiteLina, squeeze into the front. They drive down the middle of the street singing Do You Believe In Life After Love? They stop at another house and by some miracle a fourth passenger squeezes in. No, he says. I Really Don’t Think I’m Strong Enough, No. His name is Tom. They’re going to a stand-up show after he finishes his essay. He has all day to write it. This week is packed! Lina says. She sips her coffee and sets it down, then picks it up and takes another sip.

“How was the radio show?” Jase asks.

Lina is saying how she thinks it was just fantastic, when a couple approaches the front and Jase has to excuse herself to grab their order. The couple leans over the counter, moving as one mass. Jase’s voice comes out quiet.

“What did they want?” Kite asks.

“What did they say?”

The couple is still there but Kite and Lina don’t care. You can’t ask that. Their voices rise. What? You can’t say that. What the hell. Jase smiles. Tom texts them that he’ll meet them at the show. Jase says have fun. The couple orders to go.

A half-naked blonde swings from the rear-view mirror. Florida air-freshener. Four friends sit limb over limb in the front of a Chevy, singing with the windows up. The plate reads: CRYBABY. Lina opens her mouth and joins in. Not strong enough, no.

Kite, Lina, and Tom arrive at the entrance of Wee Johnny’s. This guy pulls the cigarette out of his mouth and holds it between two fingers when he sees them, spreading his arms in greeting.

Tom rubs his hands together while breathing air onto them. Kite says that’s the guy you speak to if you want to perform. They claim a table somewhat close to stage with their belongings before ordering drinks. Kite and Tom get beers and Lina gets a cider. The guy from outside walks past and Lina stops him.

All the comedians are local. Lina thought they would be younger. Each time one of them goes up they say, without fail, sooooo weed is legal. And every time the friends clap and shout like it’s the top dog up there, like Jesus himself is back and spitting fire.

“Wow,” some say, sounding unsure. “You guys love that eh? Okay. I’ll give you more.”

Lina clutches her heart. Kite and Tom hide their faces behind their drinks.

The guy from outside wraps up the night. He’s all jittery, all teeth. Lina wipes the sweat from her palms. People around them start to leave. She slumps in her chair, just a bit. Tom notices and tries to catch her eye, then looks away.

The snow is picking up. A dead pigeon is frozen to the ground.

“Hey did you guys hear?”

“Weed’s legal did you hear?”

A bus pulls over and the three of them get on, falling against each other in a three-seater. Tom gets off first, then Kite and Lina. The trees cast a heavy weight. They thump over a wooden plank and something scurries away. A rabbit. They feel sorry. They did not know it was there. Awake, alone, and afraid. The night is white and soft. There are clean towels at the foot of Lina’s bed in the guest room. The weekend is up.

Lina bends and drops money into a street musician’s hat. She looks up at the towering buildings surrounding her. Back in the city. Behind her, the musician begins to play with more energy. Do you believe in life after love? She texts Kite. She wishes it were enough. 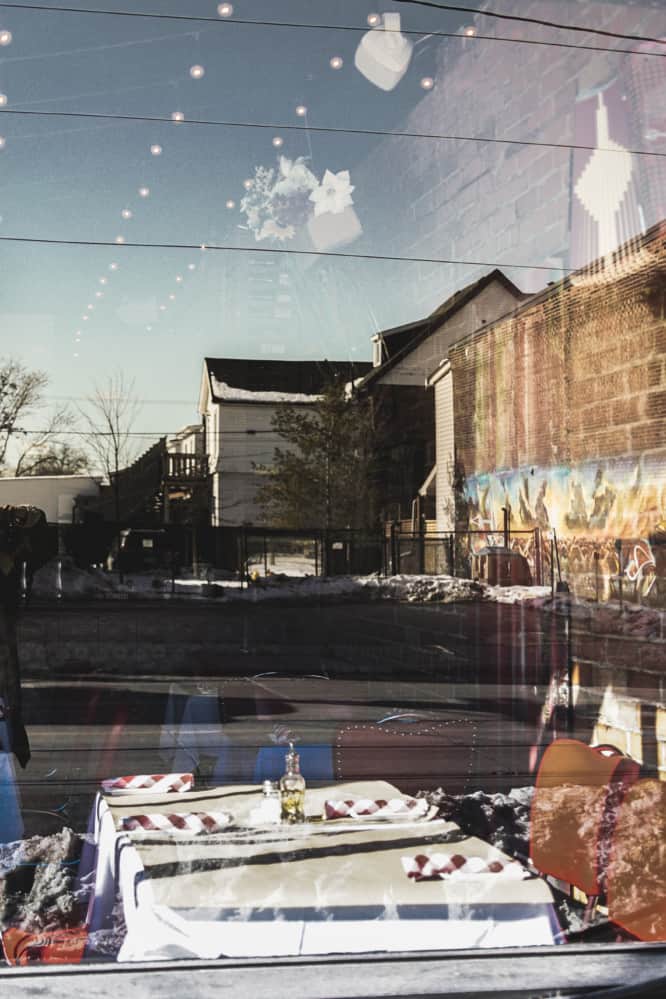 ← Below the Peach Tree Between the Pages: The Authors and Their Inspirations →

edits Half a Grapefruit Magazine. She is the author of the chapbooks Everyone In Your Dream Is You (Anstruther Press, 2018) and Oh(!) (Dancing Girl Press, 2019). Find her at @liliecup.