Authors Note: It was on the trail end of the school term when I wrote I, Trust. I had spent those three months in a haze of weariness and discontentment and around finals, I found myself sitting in my bed, furiously typing this piece into being. The story’s subject matter was not consciously chosen; I didn’t know what I was going to write, or that I even wanted to write anything in the first place. I was just trying to capture what I felt in that moment into physical form and I, Trust was the result. So, while this piece was intended to showcase raw emotion, in no way was it meant to ascribe a certain meaning or opinion on death. At its core, this is a story of a man and his dog, of devotion and belonging. With that in mind, I hope that you find this a worthwhile read, and that some part of it resonates with you.

“Just hang in there, buddy. I’ll be right there, okay?”

The dog whines where it lies on its side, amidst the scraggly plants and dusty ground. Its ribcage rises and falls, breath whistling through its nose, quick and panicked. Its hind legs are bent at an odd angle.

Hanging from the cliff face is a man. He descends slowly, hands and feet fumbling for purchase on the rocks.

Metres below him, the dog whimpers again, and the man curses quietly. He looks over his shoulder, looks down, down, down, and grits his teeth. He turns back to the cliff face and rests his head against it for a second, just one shaky second. And then he continues down.

“I told you not to go so close to the edge,” he says, “but did you listen? No. No you never do. Why are you such a stubborn dog, huh? Always doing whatever you want, you rebellious little…”

The man laughs, thin and reedy. The dog’s tail goes whump on the dirt.

“Jim’s gonna kill me. He’s gonna kill the both of us, bud. Him and his dang cat are gonna give us that look—you know the one—and we’re both gonna be in so much trouble.” There’s a gasp and a hiss; the man has cut his skin on a rock. “Shit. Ugh, there’s dirt in it.”

The dog huffs, breath coming faster. It rubs its head against the ground and paws at the weeds in front of it.

The dog thumps its tail on the ground, a weak one-two beat that has the man smiling. But it’s a strained kind of grin that stretches and wavers on his face before faltering completely.

He exhales, shuddering. When he reaches down to grip another part of the cliff face, the dog smells salt.

The sunlight lands hot and merciless on the earth, on the dog, on the man. It itches at fur. It irritates pale skin. The back of the man’s neck is reddening. Under the heat, his breaths are laboured. His movements become sluggish. Reckless.

The dog stares, eyes wide with pain, as the man lowers his leg, foot searching for purchase and support. It watches as the man assumes he’s found it on a small jutting rock of the cliff face, as he puts his weight on it and removes a hand. Watches him pat the area around him for another handhold even as the one under his foot crumbles, sudden and noiseless.

There is a startled shout, the sound of fingers scrabbling on rocks and then—

He rolls down the slope, to a stop barely half a metre away from the dog. He does not move.

It is barren out here. The earth is devoid of everything but weeds and stringy grass. The sun shines relentlessly, and there is no wind to move the stagnant air.

It is gradual, then, when the dog catches the scent. It’s sharp, the smell of blood; it stings the dog’s nose. And there, the red, creeping out from under the man. The air grows thick with its scent, cloying and heavy. The dirt drinks it up, swollen.

The dog breathes it in, like the man asked. In and out. In, out. Good boy, the man had said. The dog wonders if there will be a treat.

The dog barks. It woofs and it whines, but the man does not rise. He is entirely still, hand lying outstretched towards the dog, fingers half-curled up to the sky.

It hurts. Its’ legs—they’re frozen and they’re burning and they hurt so much. The dog wants it to stop and it whines, staccato. Make it stop.

But here is an empty place, here is a dead place. Here, nothing will hear the whining, the crying. And now that the man lies cold under the sun, here, there is nothing that can save it.

It doesn’t know any of this; it’s just a dog.

So, it barks. It bark-bark-barks and when the man continues to lie still, it crawls forward, dragging its legs behind. Every inch it travels jostles the broken bones, every movement pulling yelps from its throat. When it collapses by the man’s side, its chest is heaving.

And it might be just a dog, but this, it knows:

The man will wake. And when he does, he’ll take them away.

It noses at the slackened hand and woofs, soft.

The fingers do not move.

It does it again.

Not even a twitch.

Something rustles the stringy bushes. Further away, something else calls out. Shadows slide over the earth, leaving and returning and leaving and descending, and still the dog push-push-pushes at the man, with its nose, with its paws, with its teeth, and the man—

—stops in front of the dog’s cage.

“Hey, wait—what about this little guy?” he asks.

The dog pants harder. It rises on it’s hind legs, pushing against the bars. It barks.

“Well, aren’t you excited to see me,” says the man. He kneels and lifts a hand for the dog to sniff.

It takes in his scent. It gives him a lick, then another. Its tail wags faster and it barks again, paws slipping through the bars. It topples right over.

“We’re here for a cat,” says a dark-skinned man. “We agreed to this, Connor.”

“I’ll do the dishes for the rest of my life.”

“Tempting, but it’s still a no, Connor.”

“Please? We should change things up a bit. Look, we already have a cat—”

“Which is why adopting a dog might not work out—”

“But look at him! He’s so excited he’s going to break down the cage trying to get to us—whoa, hey!”

The man slaps his hand over the bars, where the dog is halfway to sticking his muzzle through.

The dog licks at his palm and the man jerks back, startled. The dog successfully wedges its snout between the bars.

The man looks at his hand. He looks at the dog.

It wags its tail.

“Yeah, you’re proud of yourself, aren’t you,” says the man.

The dog whines, straining forward to reach him.

“You just don’t know when to stop, huh?” He scratches the dog under the jaw and its tongue lolls out. The man snorts. “Gonna be a stubborn one, for sure.”

“As if the cat we have isn’t stubborn enough,” says the other man. “This is just asking for trouble, I hope you know.”

The dog woofs, and the two men share a look.

Finally, the dark one sighs. “Fine,” he says, walking away. “Fine. I’ll go fill out the paperwork.”

“I love you!” the kneeling man calls out. He turns back to the dog. “What do you say, buddy? You gonna be trouble for me if I take you home?”

His only answer is a woof and a slobbering lick up the inside of his arm. He laughs.

The dog blinks. There is dirt in its eyes. Its tear ducts open, and it cries, silent and uncomprehending. It licks the blood from the man’s knuckles.

The man stares back. His hand bends with the movement, pliable and meaningless and vacant, but the dog licks and licks until he’s clean.

Just a dog that wants warmth and healing, wants hands scratching under its chin and on its stomach. Wants treats and walks and toys of every size and shape. It wants familiar comforting scents, wants its other human, the one with the quiet voice and dark skin. It even wants the cat, with its yowls and scratching, wants to chase it around in the grass, wants its paws pounding on hard-packed dirt, wants wind in its face because it’s only a dog that doesn’t know, that doesn’t understand, and all it wants is—

“Fi—? And you yelled at me for naming our cat Broom.”

“Fido’s a good name! It means loyalty, doesn’t it?”

“Loyal fits him. Look how stubborn he’s being about not leaving my side!”

“You’re never gonna give up on me, right, Fido? You’re gonna stay with me wherever we go? You won’t abandon me somewhere in the mountains in Japan like mean, old Jim did?”

“I didn’t—you wandered off on your own!”

“What’s that? You’re gonna be my best friend forever? Oh, who’s a good boy? Who’s a loyal boy? Yeah, you are, you’re the best boy—”

“Alright, chill. Aaand, done. Well, Fido, you’re officially ours, now. What do say we head on home? Yeah, you like that?” 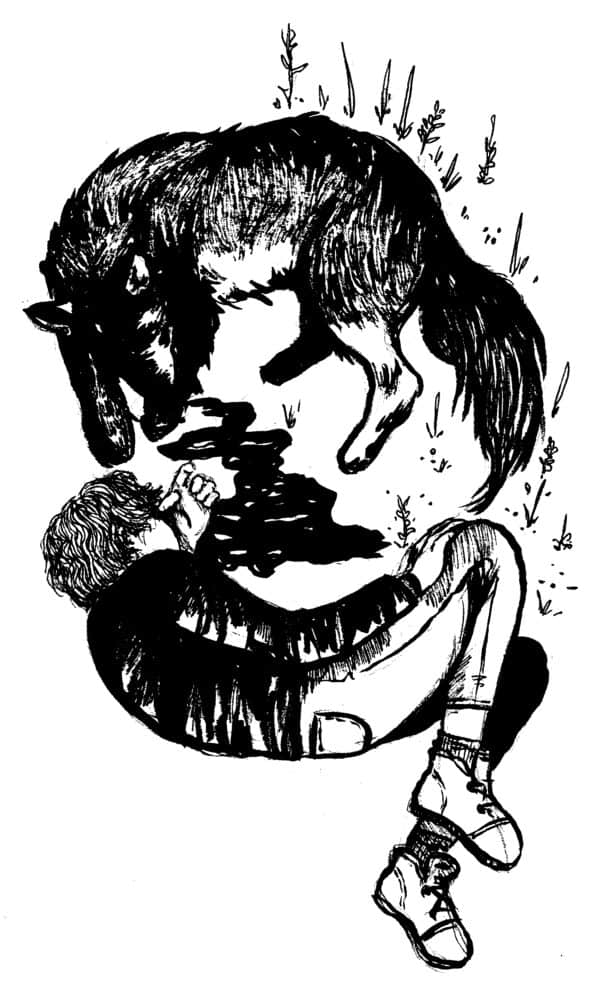 ← Julius Caesar Below the Peach Tree →

is a Vietnamese-Canadian student from Vancouver, BC. She is currently studying Linguistics and Creative Writing at the University of British Columbia. Her work has been featured in Polar Expressions Publishing.

is an illustrator and storyteller studying publications at OCAD. They love to illustrate with pen and ink and are the co-founder of Old Growth Press. Keep in touch @cleopatriia on insta/twitter/tumblr.