News & Politics
Quid Pro…So?
15
November, 2019
Louis Butt, Blog Correspondent
It’s all so caricaturable. A big, orange-toned president, acting on the advice of his stumpy, loud New York lawyer, barters over the phone with Ukraine’s President Volodymyr Zelensky, offering military aid in exchange for dirt on his political opponent Joe Biden, whose son sat on the board of a Ukrainian energy company. The move gets figured out and the walls around the president start to close in. President Trump is now facing an impeachment probe for this quid pro quo, and his chances of survival are looking thinner as the process advances.
At the time this article is being written, the United States Congress’ public hearings have concluded their first day. US diplomat William Taylor, who was appointed to Ukraine earlier this year, delivered a powerful testimony publicly stating what those supporting impeachment already believe: Trump cares more about his own position and power than his presidential role in upholding established US foreign policy. The whole affair, dubbed “Ukrainegate” by some news outlets, is a watershed in this administration’s long list of controversial incidents, and its culmination might be swift. Whereas the Brexit debacle across the pond approaches the halfway mark of its fourth year, the House of Representatives has been clear in its desire to end the process before the end of the year. The recesses of Thanksgiving and Christmas mean there is little room for delay.

Publicly holding the hearings is but a measure to gather more support for Trump’s impeachment. Most witnesses have already stated their case behind closed doors over the past two months. However, this gives ground for Trump to say that the hearings are a manufactured and cultivated plot against him, as he has tirelessly been tweeting. One political manoeuvre the president has succeeded in, however, is his gathering of a zealously devoted base, one that will believe his every word and mimic his every stance. Democrats cannot ignore this – it was manifested in Congress when Republicans unanimously voted against the impeachment procedure, meaning the legislature is aware of the grip he holds on the voter base. Even if his impeachment passes the House, as it likely will due to the Democrats’ majority, the motion will enter its final phase before the Republican-controlled Senate, in which it will need a two-thirds majority to pass. 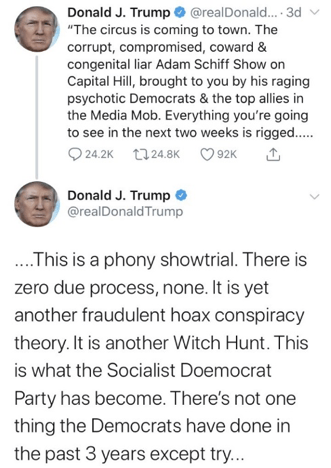 Source: Twitter @realDonaldTrump
The process’s publicness thus stands as more than a run at transparency, it is an effort to gather the minute proportion of voters that may still be swayed towards a democratic vote. Media outlets have noticed this concentration in effort, remarking democratic lawmakers’ use of simplifying terms like “quid pro quo,” and of more dramatic words like “extortion.”

Despite the Republicans’ ardent denial, their defence is wobbly at best. Not only are top diplomats testifying against Trump’s actions, the president has also lost the little foreign policy credibility he had in recent months. He talked about purchasing Greenland in August, a notion the Danish prime minister called “absurd,” and more importantly, he recently pulled US troops from northern Syria, leaving the allied Kurdish fighters in the region to fend for themselves. Defense officials and policymakers have deplored the move, marking the president’s actions as inexcusable.

Pitching himself as a businessman on the campaign trail worked for Trump in 2016, but no one outside his circle could have predicted his glaring inability to see things in any other way than as transactional. Not only does this indicate short-sightedness in his political competence, it also means he likely does not see any fault in his quid pro quo with Zelensky. In early October he told reporters on the White House lawn that China should look into the Biden’s dealings, before doubling down on his July phone call with Zelensky and asking him to do the same.
The president might not feel the ground shrinking beneath his feet as he recklessly defends his actions while admitting to them, but other Republicans do. They have turned to indifference as a means of defending the Commander-in-Chief since, as per usual, no one is truly able to coordinate with him on any plan of action. Mick Mulvaney, White House Chief of Staff, told the press to “get over it” as quid pro quos are commonplace in the policymaking world. Meanwhile, Gordon Sondland, the US ambassador to the European Union who earned his position through donations to Trump’s campaign, recently rescinded parts of his private statement to House investigators and admitted to elements of a quid pro quo with Ukrainian officials. The position he adopts during his upcoming testimony is bound to be fruitful.

Outside of the senate, Trump has few pawns left standing to defend him. In the hearings, Republican representative Devin Nunes sits next to probe leader Rep. Adam Schiff and serves to deny the validity of the inquiry every step of the way. As foreign policy officials continue to testify against the president’s actions, his countercurrent standoff is unlikely to pay off. Lindsey Graham, a Republican senator, also rebukes the investigation’s validity, arguing that the identity of the whistleblower that reported Trump’s misconducts – who has remained anonymous for security reasons – should be revealed. Schiff has since responded that the official’s identity is of little use to the matters at hand.

So, where to from here? The hearings will go on and, lest one of the individuals scheduled to talk returns drastically on their private statement, the House of Representatives will move to impeach. If the president is impeached, a trial is held in front of the senate, in which the House must select representatives to act as prosecutors. It is then up to a senatorial vote on whether to convict the president. One can expect the majority of the Republican senate to toe the line and not convict him (it would take 20 senators to vote against Trump), but his recent blunders might have caused some officials to differ. Long story short, Democrats must mount a case against the president and – unlike Trump’s call to Zelensky – make the Senate an offer it can’t refuse.

Long story short, Democrats must mount a case against the president and – unlike Trump’s call to Zelensky – make the Senate an offer it can’t refuse.

← Hong Kong Withdraws the Extradition Bill: What Now? To Invade or Not to Invade: The Possibility of U.S. Military Intervention in Venezuela and Its Potential Legal Justifications →